(Originally published 8/10/2014  on my old blog, Outdated By Design.) Before tiny houses were a thing I lived in this adorable teeny house in South Burlington, Vermont from 1995 – 1997. I was in grad school and it was all I could afford yet it was all I wanted. Except for the spiders. My steel-toed Doc Martins came in handy then. Someday I’d like to return to tiny house living. 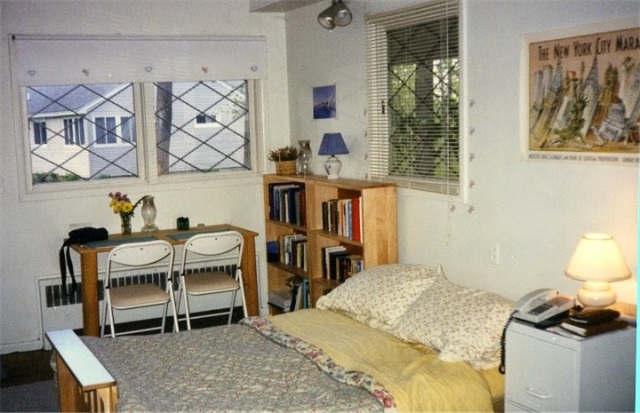 I still have that NYC Marathon poster and the bookshelves are in my current home office. I had been using plastic milk crates and a friend/classmate took note. Her husband was a skilled professional furniture maker and they surprised me with those two units! Also in the photo above is an old school BAG cell phone. Back in the day that was high tech stuff and it came with a gigantic antenna. 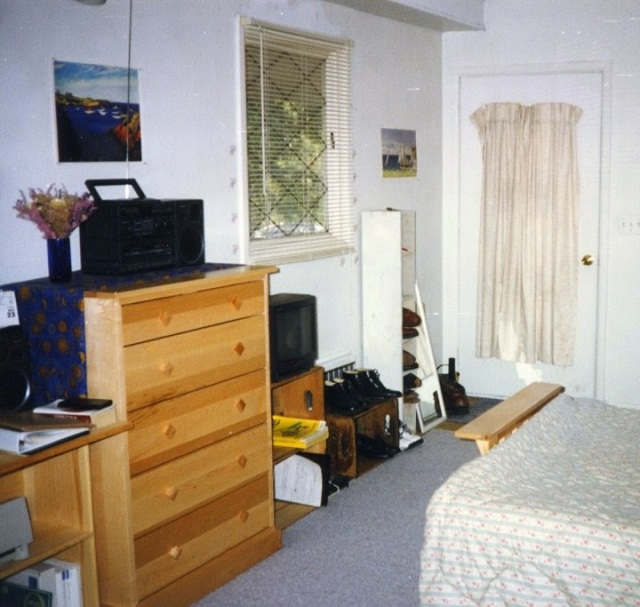 That bureau was also made by the same fellow, although I designed it. Next to it are antique wooden soda crates that I still use. I didn’t hold onto the repro Edward Hopper posters.

Even when I was very busy, leaving my house shortly after six a.m. and returning home sometime after ten p.m., I managed to cook for myself, but it was always pasta! It was all I could afford. A few times a week I treated myself to Chinese take-out, the buffet at the health food store and french fries at Nectar’s.

What got me thinking about my old place that the UPS man mistook for a garden shed while I waiting for a package one day and had to chase after his truck is that a tiny house trend is catching on. I’ve found myself wondering about what it would be like to sell off all of the vintage things I’ve worked hard to acquire and adore and go back to living with very little. I do know I couldn’t part with my rather large collection of books and holiday decorations. And, well, I think I could come up with a compelling reason to keep everything so I don’t know that I would want to do it.

Have you ever considered trading in a mortgage and most of your possessions to downsize and live in a tiny house?

9 thoughts on “I lived in a “tiny house” in South Burlington, Vermont”