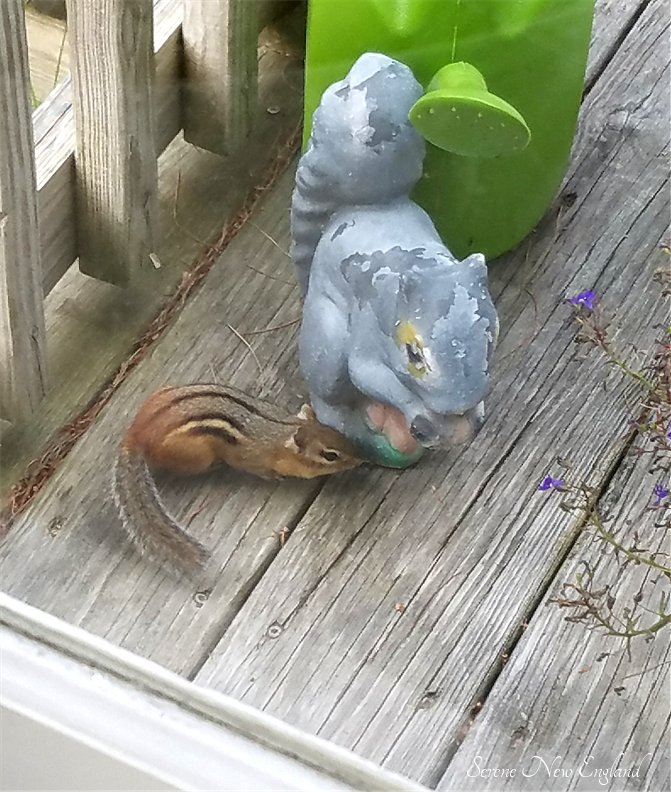 One kind of love begets another. Get all the love possible expressed in your life. Love something or somebody, if it’s only a geranium. — Margery Wilson, silent film star and author.

I’ve lived in my house over eight years and while I had always enjoyed seeing chipmunks, this is the first time that I “adopted” one as an outdoor pet or rather, she may have adopted me. It began mid August when I was ill at  home with 101 fever and I was reading in my sunroom. I noticed that she (I don’t know the gender but have come to think it’s female) was taking an active interest in me.

I thought about giving her some treats but didn’t want to encourage a feeding frenzy of all the chipmunks. Rather than put out food indiscriminately I started by placing a blueberry or banana slice on the deck where she would often literally hang out, just like this: 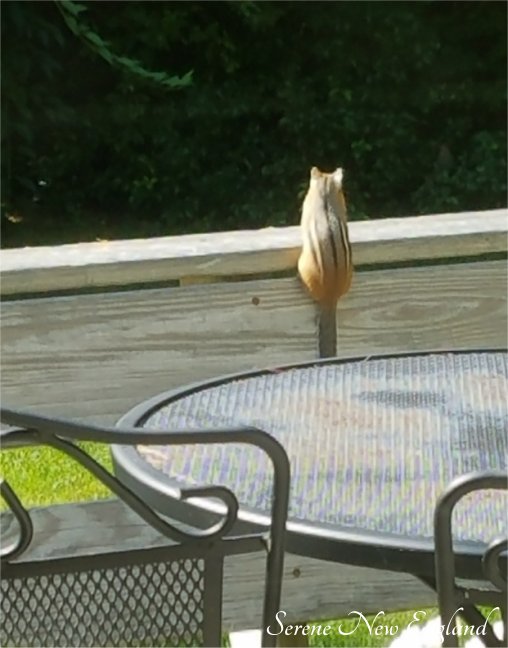 I had never seen any of the other chipmunks do that before, so it seemed like a good way to be certain I was feeding the same and only chipmunk. She began to look for her food in the spot. Over the course of about a month she became accustomed to my presence outside while I was standing near her. 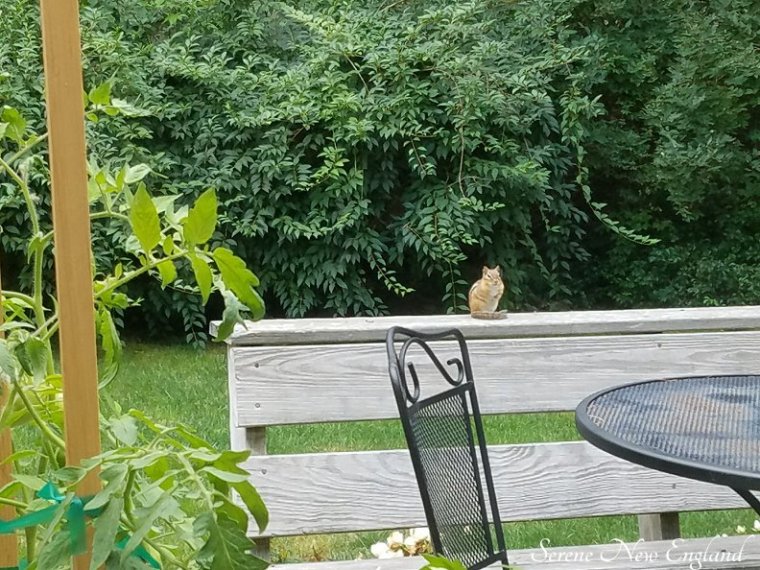 She even began to “beg” by looking into my windows and chipping!

“Someone’s getting trained,” Wayne said to me with a smile. He was right. Chippie’s charms make it easy for me to essentially “wait” on her with organic seeds and grapes, her favorites. Chippie now runs to the deck when I pull in my driveway and also comes to me when I call her name and shake a cup of seeds.

She enjoys playing peek-a-boo when I sit on the steps with her. As of last week she trusts me enough to eat out of the cup that I’m holding.

It was just yesterday morning, when I took this photo, that I noticed a very distinguishing feature: She has a small nick in her ear.

It’s sad to think it’s a battle scar of sorts but it’s a literal earmark to know I’m not feeding an imposter. I looked back at the photos of taken of her since August and enlarged them to verify that yes, despite how they all look alike, she’s been the one and only! Wayne suggested we rename her “Nicky.”

It was only a couple of hours later that I returned home from an appointment and walked to my mailbox when I noticed something on the ground. It was a chipmunk that had been run over by a car!  I panicked and ran to my yard and shouted for Chippie to come out!

I ran inside my sunroom, grabbed the cup of seeds and shook it loudly, waiting for her to come running. No sign of Chippie! I called Wayne at work to deliver the bad news. It was then that I looked out my window and saw Chippie “hanging” on the deck. I ran outside to feed her and was reassured by her ear that she was safe and alive. Thank goodness!

I’m sad when any chipmunk is hit by a car, or is killed, which leads me to my closing plea:

Chipmunks are not plotting against you; they are sweet creatures who are following their instinct to burrow. They are also doing you a service by clearing your yard of thousands of acorns! I have not had any negative impacts from chipmunks in my yard during the eight years I’ve lived here. They have left the vegetable and flower gardens untouched, and they do enjoy feeding on slugs that have been eating our tomatoes!

4 thoughts on “My Pal, Chippie”