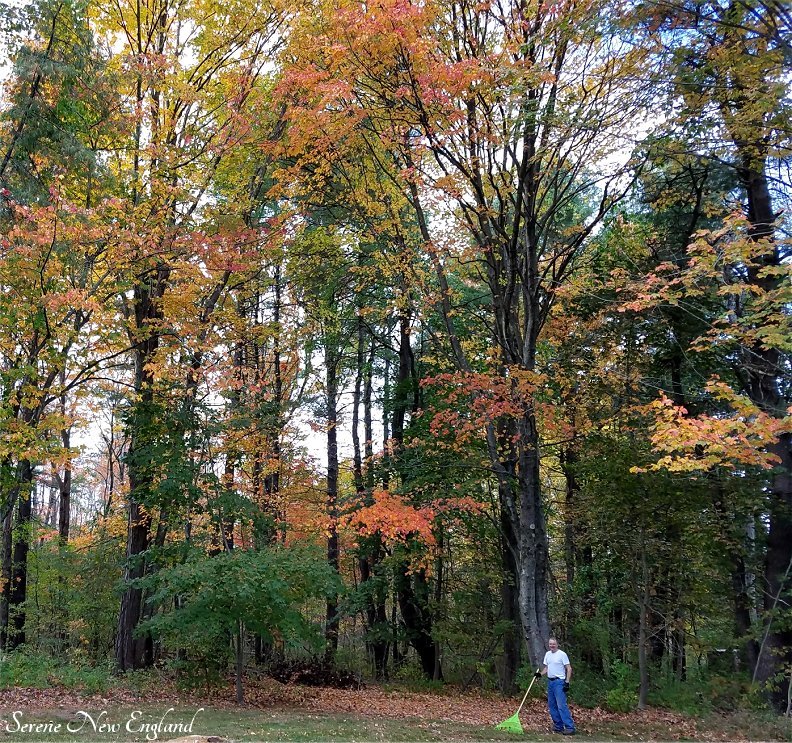 I’ve had some rough days since my last post, but I’ll start with the more upbeat stuff. The photo above is of Wayne looking rather tiny in contrast with the big colorful trees in our woods.

Our summer church, St. Ann’s, is closed until next June. Wayne and I have been going to a new-to-us church this fall. We really like many things about St. Alban’s Episcopal church in Cape Elizabeth, including the rector who is open to offering a non-alcoholic fermented wine during communion. Normally we take communion in one kind because, as people in recovery, it’s the only safe option we have. The sunrise above is the view from our drive to church this past Sunday. 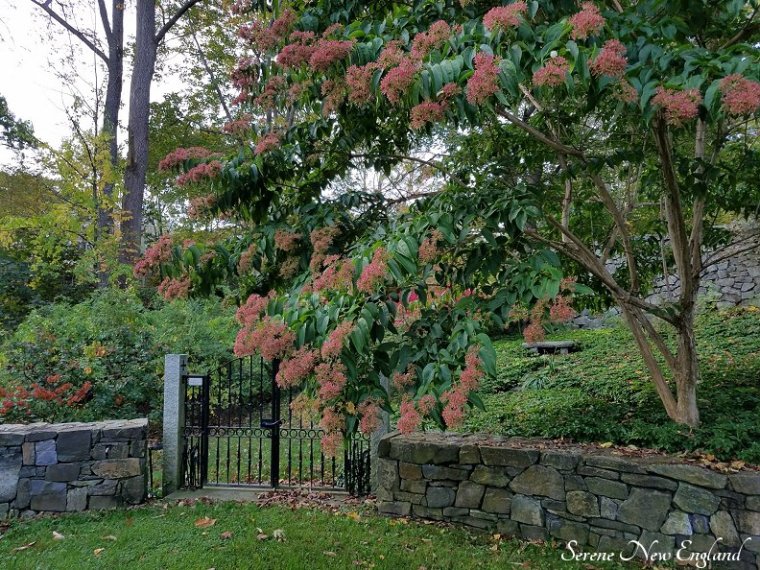 There is a beautiful garden behind the rectory. 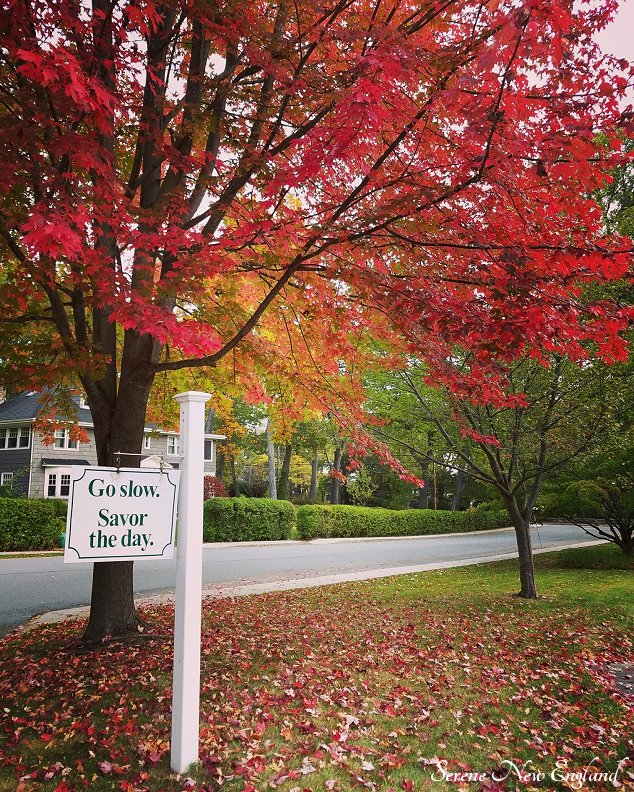 Plus, very good advice greets us every time we enter and depart.

On Saturday I went to Market on the Harbor in Portland, for which I had received a complimentary ticket. I was most excited about trying bear meat for the first time in my life. It was served in tacos with coleslaw.

The taste and texture was just like beef. It was delicious! 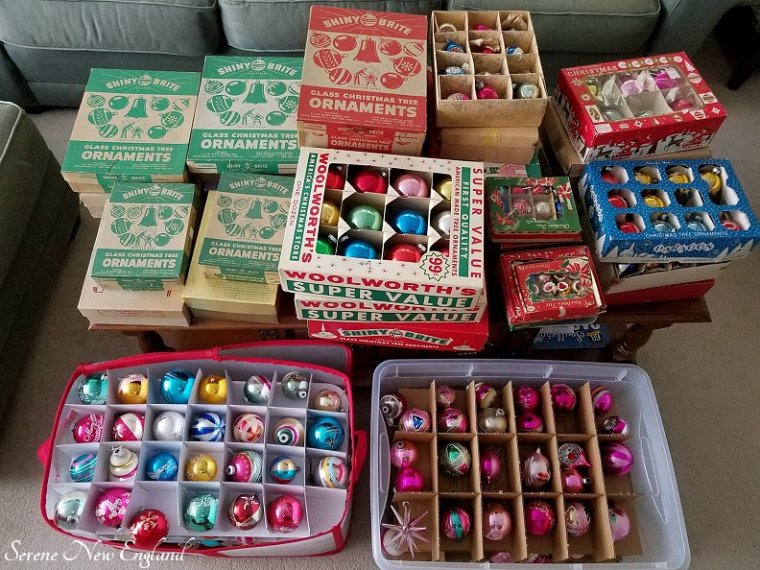 I spent a few hours organizing my collection of vintage Christmas ornaments to get ready for this year’s tree decorating. I love the holiday season!

How cool are these 1950s glow-in-the-dark (“GLO-DARK”) ornaments made by Shiny Brite? Like most of my ornaments, I purchased these at an estate sale. Wayne and I joked that maybe we needed a Hazmat suit for handling them since radiation was often used in consumer goods in the 50s. Thankfully they are safe; they need to be held under the light before they will glow which, according to my research, means there isn’t a radioactive pigment in them.

Wayne and I took a walk in the Pleasant Hill Preserve in Scarborough yesterday.

Naturally, it looks very different from the summer. There’s no denying that November is around the bend. 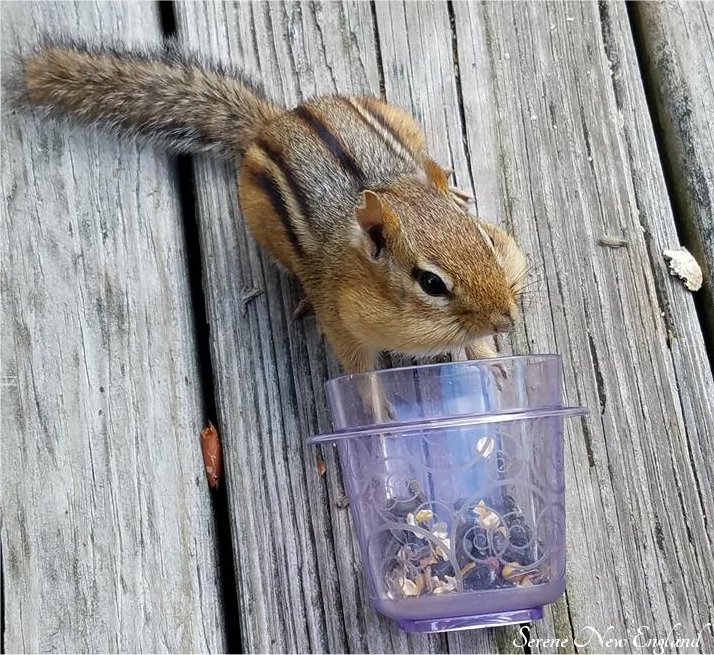 Now for some sad news. I have not seen Chippie since Friday. This is nothing like her, so I’ve been vacillating between dreading the worst (we have neighborhood cats) and hoping for the best (that she went underground for the season). I was doubting the latter because other chipmunks are still out and about, but it’s not likely that they all go into torpor (which is like semi-hibernation) at the same time. I really miss her! Update posted here!

Wayne knows how much I love Chippie so he agreed to be a part of my search party in our woods just in case she was laying injured and alone somewhere. While the search itself was futile and probably ludicrous to an outside observer or blog reader, it was still helpful to me emotionally.  Call me a crazy chippie lady, it fits!

Yesterday evening Wayne had to take me to a local Urgent Care center. I had been having pain and noise in my left ear for which I had gone to an ENT the week prior. He couldn’t see anything amiss but cleaned out my ear with a suction thingy, then stuck an instrument in my ear that caused a sharp pain, then simply concluded that maybe I have allergies so I should take OTC medicine. I left feeling worse, not better, and the pain continued to worsen each day. I wondered if perhaps the ENT damaged my eardrum when he was poking around, and it had become infected. I did try to get an appointment with my doctor during the day Monday but he and his associates were booked. It became unbearable yesterday evening and the pain spread across the left side of my face!

I must say that going to ClearChoiceMD last night was a great decision. After a thorough exam by the MD on duty it turns out that the origin of my ear pain is from TMJ. I had no idea that TMJ could cause severe ear pain, tinnitus, and radiating facial pain. I suffer from bruxism which is why I always have to sleep with a $350 bite guard. Normally it keeps me from having TMJ pain, but I had had a few rough nights of nightmares after being almost night-mare free for the summer (a first in my life). I definitely clench and grind my teeth more when that occurs.

So the good news is that the pain will pass as long as I take precautions like eat soft food for a while. I have never stopped working on having peaceful sleep. I need to focus on the progress I’ve made which is very encouraging. These setbacks are to be expected and I won’t let them discourage me.

Back to the happier topic of holiday decorating which can also be controversial (is anything not these days?!): How soon after Halloween do you put up your decorations? Also, when do you take them down? I’ve been known to put them up very early, however they are put away by mid January. Brown wreaths hanging from doorways in the spring are sometimes a thing in New England!