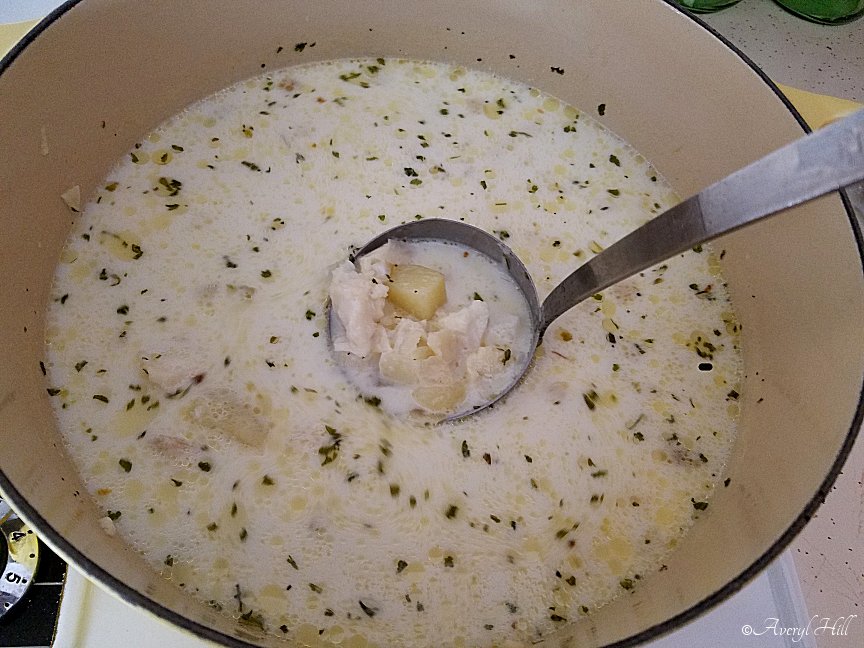 Thanks to the Maine Rebekahs, whom I consider to be some of the greatest New England home cooks who have also provided almost 100 years of recipes, you can make a winning, traditional New England fish chowder. I’ve adapted this simple, frugal 1920s recipe to make it meat-free since New England fish chowders almost always contain pork in addition to seafood. Wayne said that he wouldn’t have noticed its absence based upon how flavorful this is. Truly it’s so easy to make yet it will produce a chowder that will make you feel like a seasoned New England cook.

Place a dutch oven on medium heat and add the butter. Once melted, add the onions and potatoes and stir. Add the fish on top but do not stir. Cover with water and simmer until the potatoes are tender but not falling apart. Add the milk (no need to “scald” it. Modern pasteurization has eliminated that need), salt, pepper and parsley and then gently stir once. Turn the heat down to medium low and let sit for about thirty minutes. The chowder should be hot but not bubbling so turn the heat down if necessary.

Because of the starch in the potatoes, the longer the soup sits the thicker it gets!

Chowder is traditionally served with “oyster crackers” or, as the Maine Rebekah instructs us, “six small crackers (buttered) on top.”

I used my own homemade buttery chowder crackers, the recipe for which will appear in my in-progress book, The New England Diet.

We had this on Friday and the leftover chowder for lunch today. It’s really satisfying and true to its roots. Don’t feel like you have to use fish stock to add more fish flavor, add flour to thicken it or use heavy cream like many current recipes instruct one to do. This one is a simple winner!