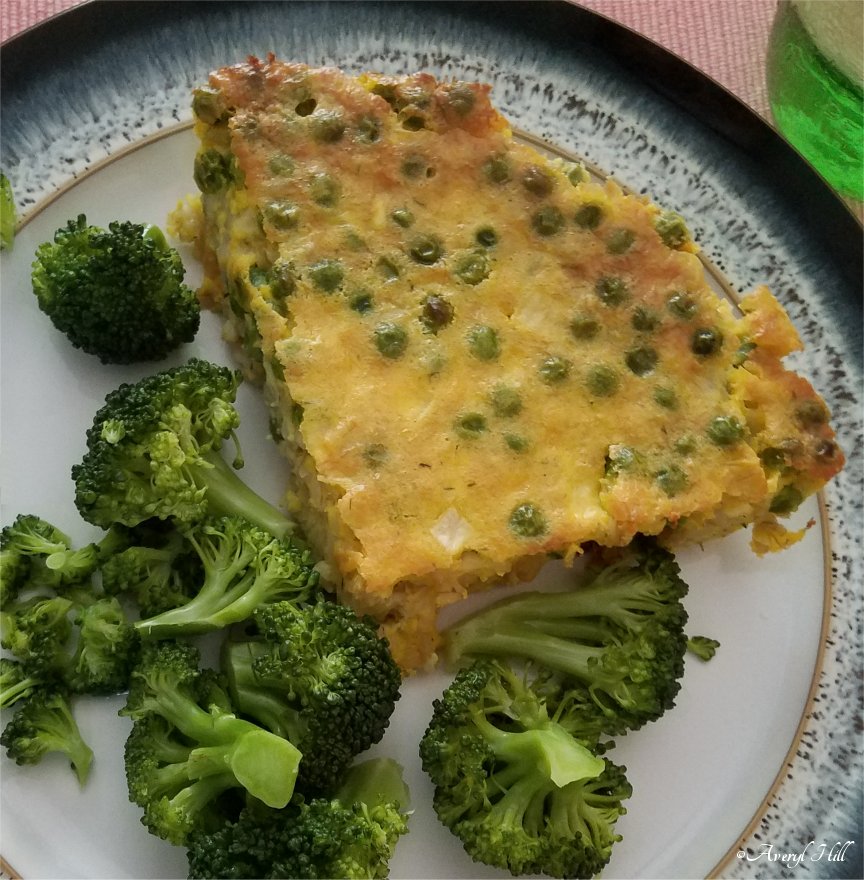 It wasn’t until I had immersed myself in Depression-Era and WWI cook books in 2015 that I developed the “courage” to create simple dishes with quality ingredients that fall out of range of preconceived ideas of good taste. Good home cooking to me has evolved to mean honest, sometimes quirky, unpretentious fare that takes the pressure off to audition for a show on the Food Network. This humble dish may not be Instagram-worthy, but so what?! It was a wholesome, healthy, thrifty delicious dinner made from food that in the past would have been discarded.

I don’t have a name for this dish because I may never make it again. The reason is not because it wasn’t good, but rather it was created with ingredients that I wanted to clear out from the kitchen, like the frozen organic peas I had forgotten about in the back of the freezer that weren’t yet freezer-burned, and that bag of “extra thick” organic oats that we didn’t really like as oatmeal. Instead of pushing it to the back of the cupboard until it expired at which time I’d be able to throw it away (and we know that throwing something “away” means that it’s in a landfill or ocean dump) “guilt free” I decided to put it to creative uses. The first use was this savory oat and pea pie!

I made a thick oatmeal with the rolled oats and whole milk before adding the peas which had been sauteed with chopped onions in sesame oil. I beat a couple of eggs and then added them to the mix once it had cooled. I seasoned it with salt, pepper and a hint of ginger, then baked it in a pie dish for about 45 minutes. Wayne and I were pleasantly surprised at its unassuming heartiness and flavor.

Being frugal and reducing waste in the kitchen isn’t just for “hard times” but can be a workable solution to a more sustainable diet.

Some of my long-time readers may recall that a few years ago I had published a WWI/Depression-Era inspired cook book on Kindle. I had decided to take it out of circulation last year because my cooking, photography and recipe writing has improved greatly since that time. The good news is that some of those revised recipes and new photos will be appearing here in my blog!

Stella thinks February is best passed by burrowing into the hay with an organic apple stick. Yes, I spoil my degus. #degus #degu #petsofinstagram #pet
Cider doesn't care that it's 21 degrees! Happy Valentine's Day! #chipmunk #easternchipmunk #wildlife #wildlifephotography #chippie #happyvalentinesday #goodmorning #brrr #maineliving #maine #newengland #february
We were in a parking lot and the icy trees were so pretty in the sunshine. Wayne thought he was taking a pic of me but hit the video instead. So, here I am. Happy post ice storm! New post up on the blog. Actually I'm not good at mentioning each new post here so you may have missed a few! #sunshine #icy #maine #maineliving #mainestyle #simpleliving #winterwonderland #woods
Sunrise over the ice storm aftermath. #sunshine #sunrays #sunrise #dawn #goodmorning #goodmorningpost #ice #icestorm #outsidemywindow #maine #simpleliving #february #bluesky #trees #aftermath #icy