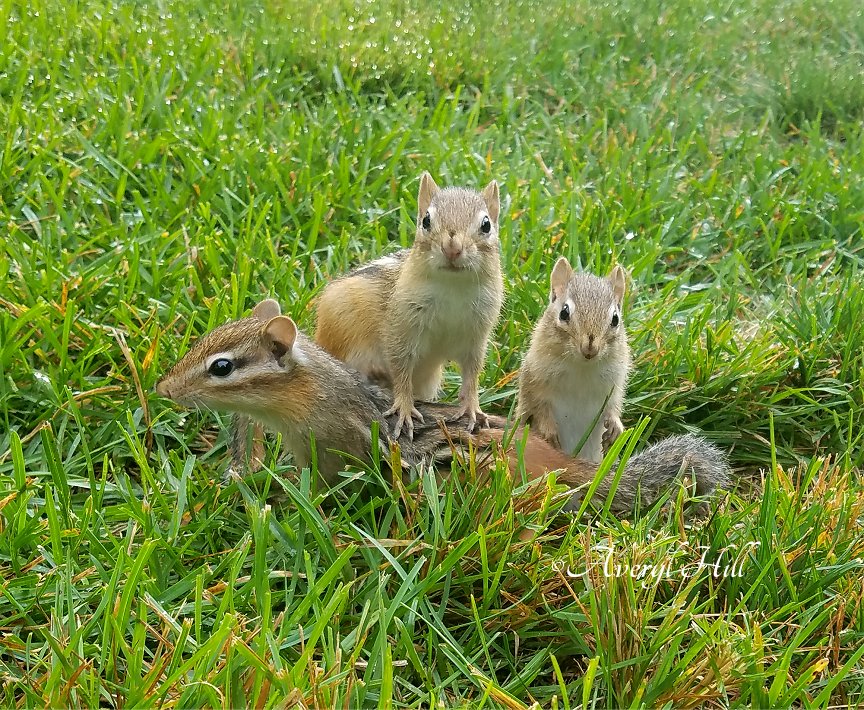 Unlike any other chipmunk I’ve know or read about, and going against all instinct, there was a chipmunk eating seeds on our deck instead of stuffing his cheeks and bringing them back to his burrow to store for the coming winter. People wonder how I know the gender of a chipmunk. It’s always been a guess and this one was a give-away: Ricky, as I named him, would gladly eat what I served him but then always left the shells behind so that I had clean up his mess. “Typical man!” friends would say when I shared the latest chipmunk news. (It warms my heart that people ask and take an active interest in their antics. If they don’t ask I tell them anyway.)

In reality I had no idea what was actually in store for the future. Ricky was not all what he seemed to be, and neither was Tailor, the chipmunk living in our side yard with a black “ring” around her tail and named after Elizabeth Taylor who  loved and kept many chipmunks as pets and had a famous fondness for jewelry.

Here is the beginning of this tale: Sometime in July I saw Tailor sitting peacefully on our deck rail with another chipmunk. Chipmunks are highly territorial with one of two exceptions being mating season so it appeared that she had a gentleman suitor, Ricky.  He wasn’t in danger of becoming one of a string of husbands since chipmunks, who live solitary lives as lifelong loners, mate but never “marry”. Not long after, Tailor, who used to visit my deck every morning and evening, stopped showing up. Ricky, however, was now visiting the deck regularly for seeds. 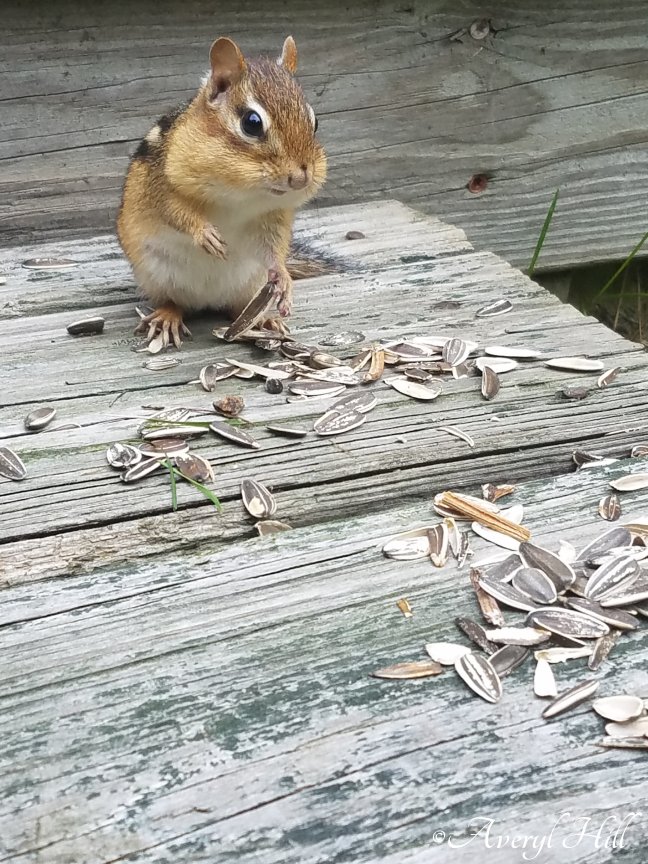 My guess was that Tailor was taking it easy in her burrow due to pregnancy and that Ricky was taking advantage of the free food. But as time passed I worried that maybe I was wrong. There were no babies. Tailor then made a brief appearance a couple of weeks ago and I watched her leap into her burrow. But that was the last time I saw her and Ricky then moved into her burrow. That was an ominous sign. Perhaps she had passed away; chipmunks will occupy abandoned burrows.

Early Monday morning the air was crisp and lovely which is typical for Maine in September. Ricky was waiting for me on the deck step. How he was able to override his instinct to prepare for winter and not save his seeds was a deepening mystery. I went outside and gave him the first helping of seeds. When I went back inside and looked outside the sunroom window I saw not one but two chipmunks come out of Ricky’s burrow! 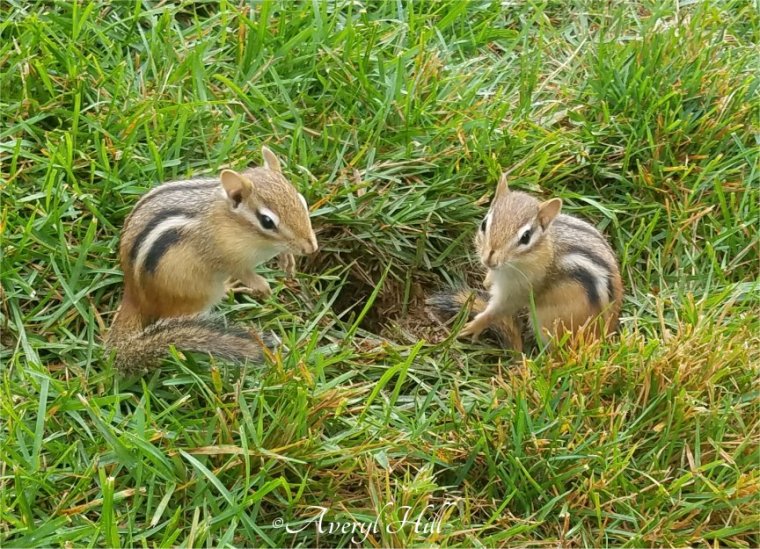 I ran inside and yelled to Wayne: “Babies! Babies! Babies!!!!” I did the same last year when dear late Chippie had her babies. Then I ran back outside with my camera and keeled down on the ground away from the burrow but close to Ricky. I saw Wayne in the sunroom looking out the window. What happened next was something I will treasure for the rest of my life. 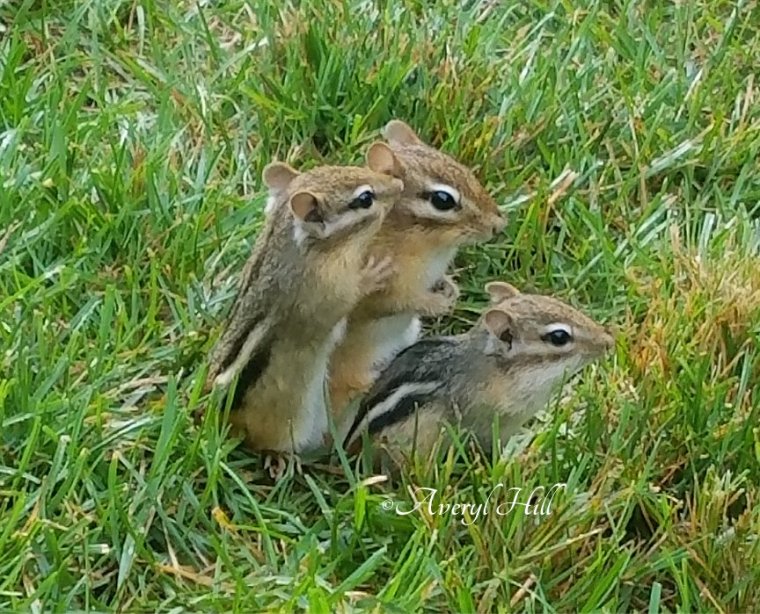 Like clowns coming out of a tiny car, I watched as one, two, three… 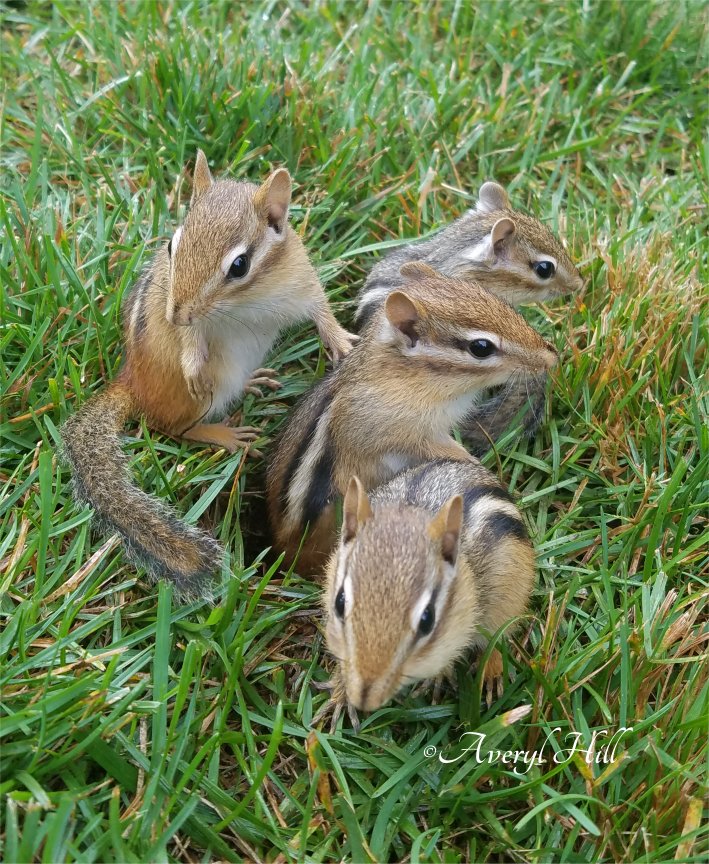 SIX! babies emerged from the small hole of the burrow.

I had gotten it all backwards. Ricky was a mom! Tailor was the father! Ricky had been shelling the seeds for her babies before she brought the seeds back to her burrow. It also seems that Tailor gave up her burrow for Ricky and their offspring. 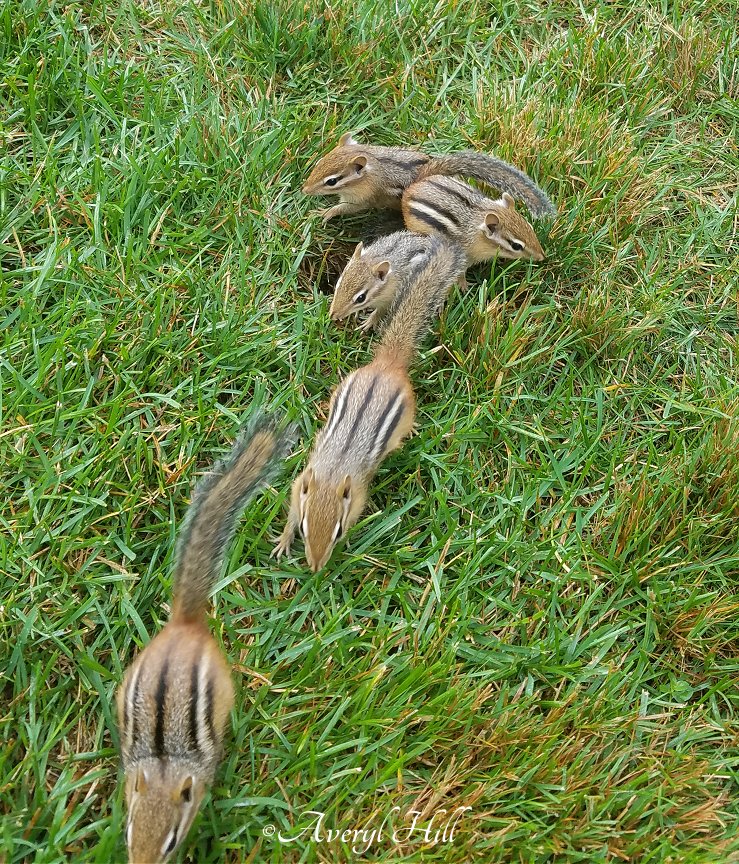 The babies then ran towards me and I was surrounded by six little miracles as mom watched. One baby sniffed the toe of my shoe. I could hear Wayne laughing in the sunroom. What a thrilling experience!

The second exception of when chipmunks are together is when they give birth. According to my research the babies stay underground until they emerge for the first time around six weeks later. For the next week or so they live together relatively harmoniously with harmless sibling rivalry. When they leave the burrow and mom permanently a week or two later they toss aside all familial relations and become lone wolves, so to speak.

There is another addition to this charming tail/tale: I looked through the photos of Chippie’s babies, she only had three, and one of them had a small ring around its tail. It was Tailor! Chippie is the grandma and it’s possible that dear late Wishy is the grandfather since I always suspected he and Chippie mated!