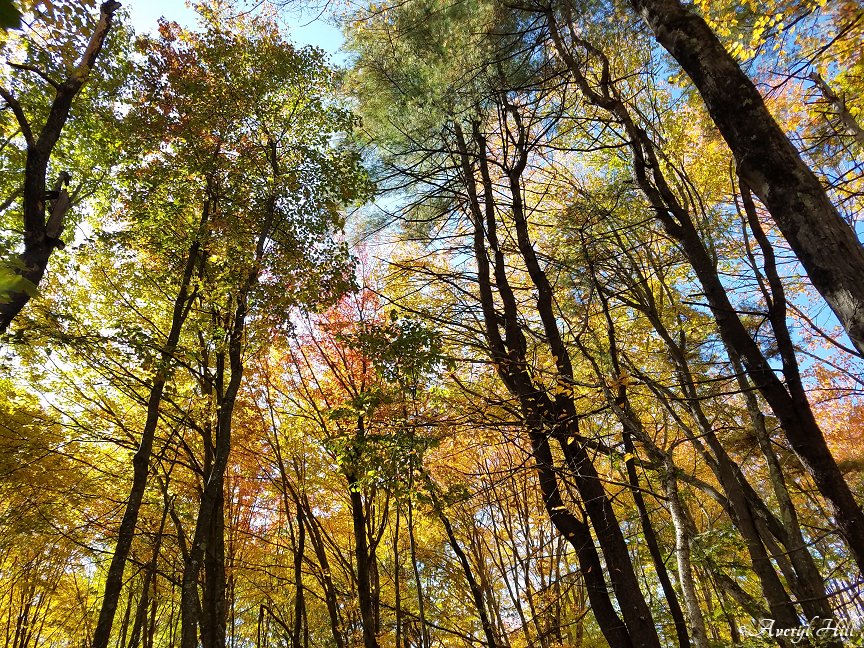 I took some photos of the foliage in our woods a couple of days ago before the storm (“bomb cyclone“) hit last night knowing that many of the leaves would be blown off the trees. The winds packed a powerful punch with gusts up to 60 mph. I got out of bed at 3:00 a.m. and made the coffee knowing that a power outage would be likely if not imminent. Forget bread and milk–dealing with a storm without that hot morning cup is just…no. The winds were literally roaring outside just like the storm two years ago that knocked down a large tree in our yard. Around 3:45 the power predictably went out. The house was silent which made the noisy mayhem of wind and rain outside seem even louder. As long we didn’t hear any snaps, cracks and thuds of falling trees and…

“What was that? Was that you?” I asked Wayne who was in another room.

“No, I thought it came from the kitchen.”

We couldn’t figure out what it was. It was still completely dark outside. Then I saw the lights of a truck a couple of houses away on our street when I peered out into the sunroom. I went further out to get a closer look and could hear chainsaws and…

“Wayne! Come out here! Our window is on the table!”

The wind has knocked one of our vintage windows out from the frame and it landed on the glass top table! Wayne put the window back in and I helped him cover the broken glass portion with a plastic trash bag secured with thumb tacks until he can fix it this weekend. Broken glass was on the table and floor, but as it got lighter outside we saw that only one of the window panes had broken and the table top was unscathed. As for the truck, our neighbors tree had fallen into the road and was cleared away very quickly.

We had our power back in a couple of hours and no other damage, thankfully. (Update 10/18: We do have some trees down in our woods.) We were lucky, though, because thousands in our town are still without power. Nature did do us a favor with some FREE tree pruning! That’s what I came up with as I cleaned up the backyard while Wayne was at work. 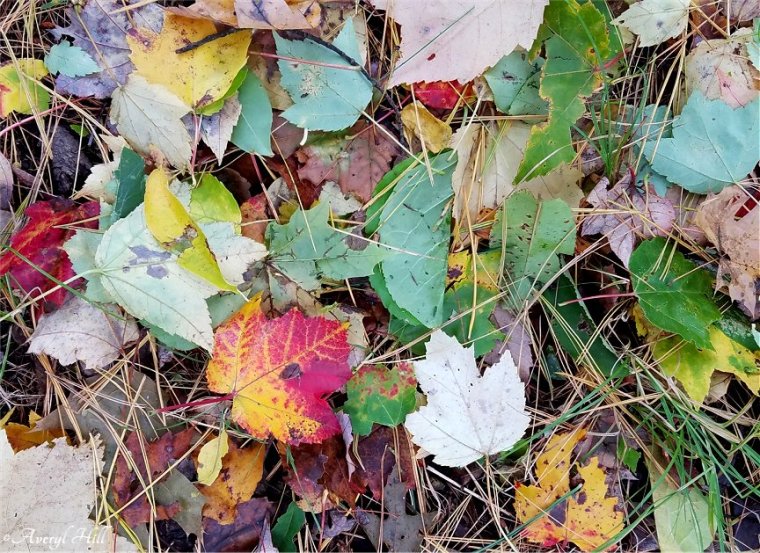 For a couple of hours the temps were in the 50s, the rain had stopped and the winds died down so it was very pleasant. Nature’s carpet of wet, dying leaves is a canvas of color!

There were some long, thin tree limbs and loads of branches downed from the storm scattered all over the yard. It’s projects like these that I love so much because I get to do something productive outdoors, see tangible results and get my heart rate up. Why pay to join a gym when I can get a workout while getting work done? 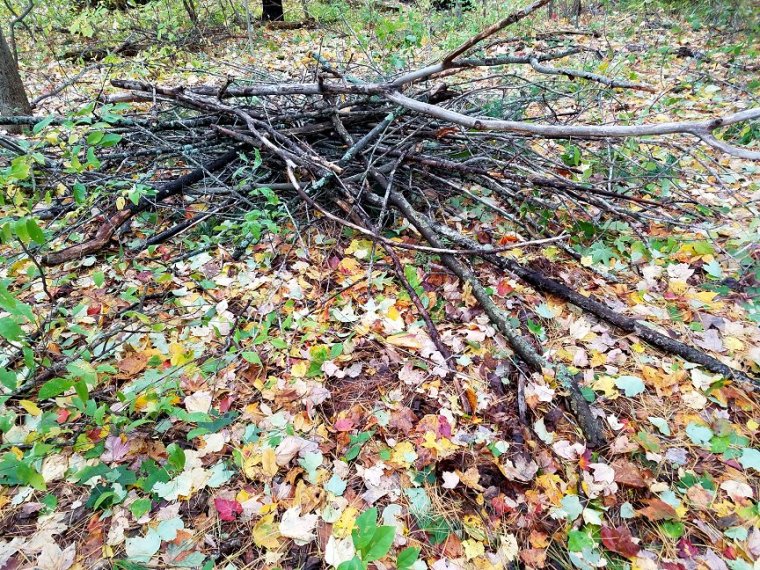 I made a pile in a clearing in the woods. I admit that as a neatnick who likes everything just so, nature is constantly reminding me that the natural world is very messy. However, that doesn’t mean it’s without order! This pile of debris will break down over time, provide nutrients for the soil and maybe a hiding place or habitat for wildlife. 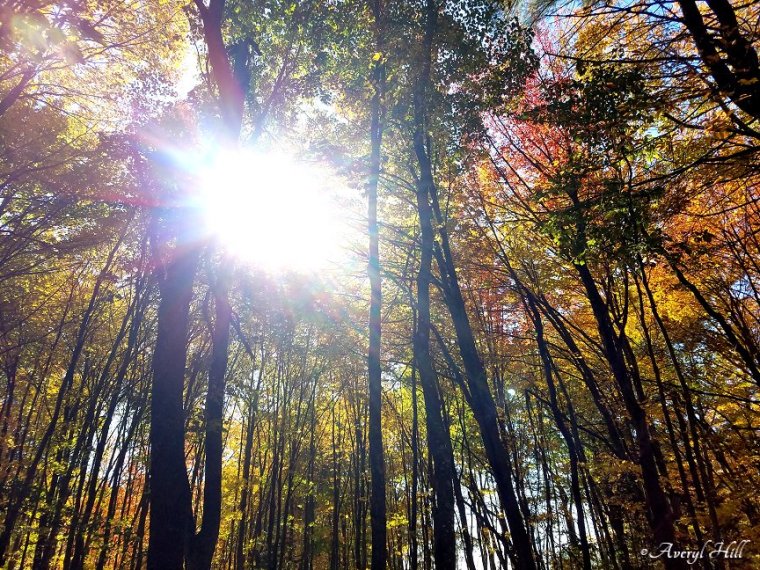 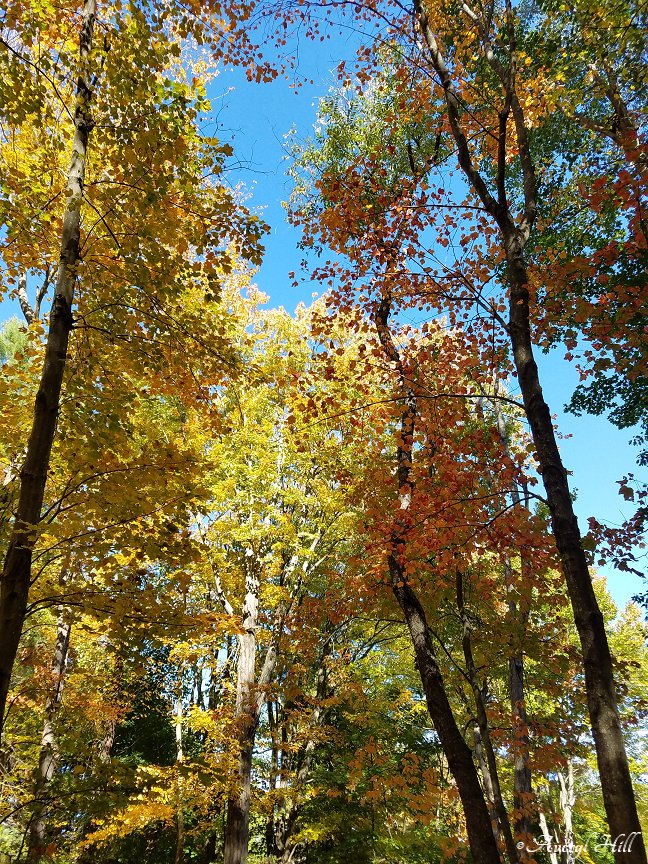