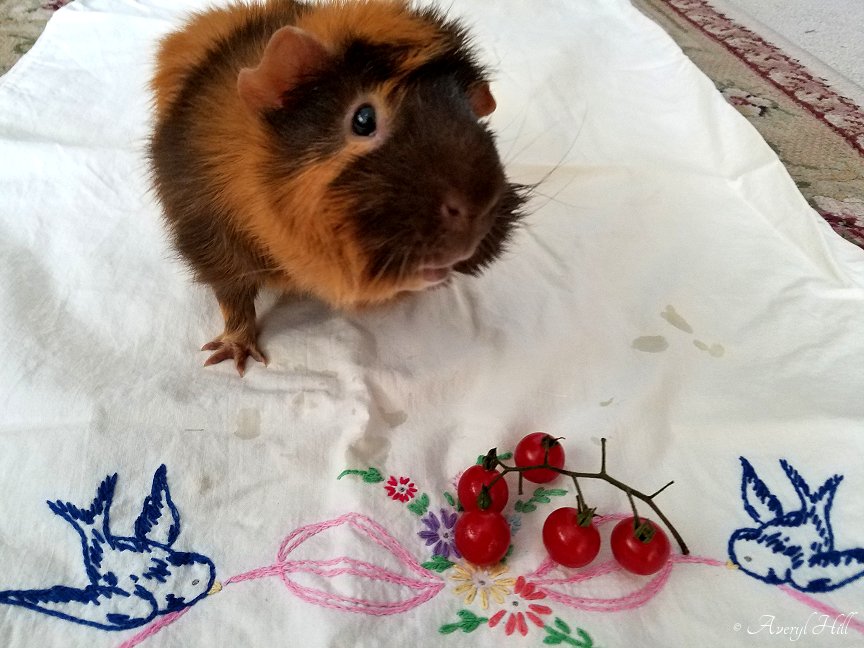 Our guinea pig Tiny Tim aka Timmy passed away January 2017 but I still miss him daily and draw inspiration from him. His lessons were so powerful that I wish to share them again. I originally posted this in my old blog.

Prompted by a “calling” that came without any explanation, I picked up the phone and dialed (literally since I still use vintage rotaries) the local shelter early in December 2013. I asked if they had any elderly or hard luck guinea pigs. I’ve adopted and rescued guinea pigs since I was ten years old.

“As a matter of fact I have just the pig for you.” He was in need of a foster home, she explained. His background, quoted directly from his intake papers:

“G. Pig surrendered in last 24 hours with history of child in home rough-housing with animal.”

When he was brought into the shelter he was laying on his side, the position he had been in for days. Because he had been left untreated and unattended, he suffered loss of vision in his eye due to his cornea getting scratched from laying in his bedding. The mother asked if the shelter could fix him up, can she come back and get him? (NO!)

They brought me to see him where he was housed in a separate building for special needs animals. He was able to stand at that point, but he stumbled and whimpered as he walked, and walking was still difficult due to suspected vertigo. He was thin, wouldn’t eat any fresh fruit or veggies, and was on heavy duty antibiotics. Most notably he seemed understandably depressed. 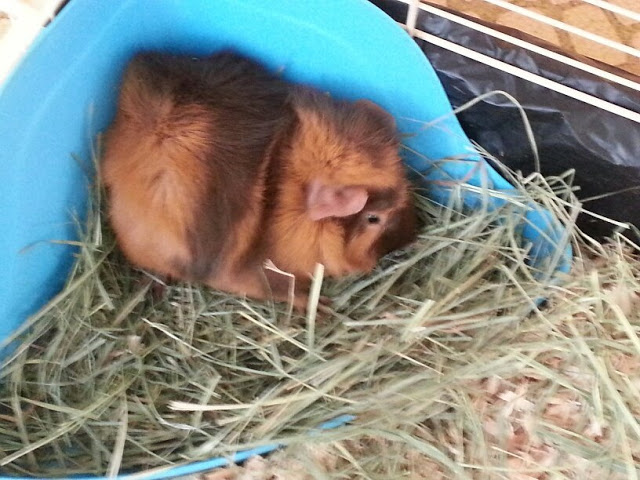 I was overcome with some very strong emotions, mostly anger. How could someone permit this to happen? How could an adult not seek appropriate care? I told the shelter I needed to talk to my (now ex) husband that evening about fostering.  The next morning we went to fill out the paperwork and brought the patient home.

When he wasn’t huddling in the corner where he could keep his head steady, he struggled to eat or walk. His head went to the left, then right. Left, right, left like he was watching a tennis match. My ex made him a little pillow out of a sock so that he could lean his head on something soft to stop it from moving while he tried to eat.

I spent a lot of time apologizing to Timmy for what had happened to him. I cried. I prayed to God to give me the courage to have faith in the goodness of things so that I wouldn’t give up on him. I wanted Timmy to feel God’s love. I kissed him all over throughout the day. I hand fed him with a syringe. I had his medication adjusted because it had been too strong and then took him off of it while giving him probiotics. His poor little stomach was upset from the heavy antibiotics. The good news was that our vet said after his exam that neural pathways can redevelop, so that if he had sustained brain damage he could still learn to walk without falling.

It was only after a few days that we decided to adopt him and be his forever home. I officially changed his name to Tiny Tim at that time since it was the Christmas season. 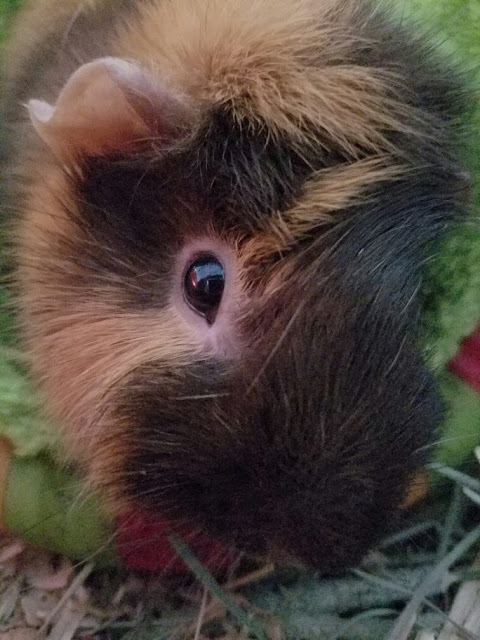 Over the next few weeks the dullness left his one good eye and gave way to a healthy twinkle. One morning he began to run around his cage and when he fell over a couple of times he got right back up! I laughed and laughed and that seemed to encourage him. Timmy’s walking and balance began to improve daily. He developed a very healthy appetite albeit a discriminating one (foodie). I trained Timmy, once unable to stand up without falling, to spin on command! 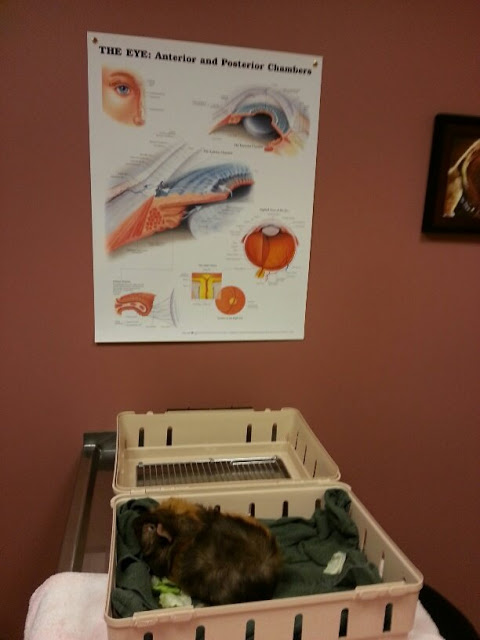 About eight months later we had take Timmy to the vet because his blind eye was leaking a great deal of mucous which was also oozing out of his nose. He was placed on antibiotics again which were still very hard on his digestive system; during that time I hand fed him since he’d stop eating on his own. After his course of treatment he was no longer sneezing but his eye discharge continued. We made an appointment with the only veterinary Ophthalmologist in Maine. I wasn’t prepared for what his exam revealed. His diagnosis and prognosis was heartbreaking and shocking. It’s not for the squeamish so skip over it if graphic animal abuse is too much to read.

In summary, as the result of his abuse, the least of it was that he would need his eye cleaned and moisturized 2-3 times a day for the rest of his life. The devastating part was that he would have ongoing infections needing antibiotics due to a skull fracture from head trauma. The bacteria becomes resistant over time with repeated use, and his stomach could only handle so much medication without damaging it. Although not on the official paperwork, she suggested that I consider euthanasia.

Timmy did have repeated infections that first year or so, and he became resistant to two different antibiotics. Then I had a brainstorm. I noticed he seemed to do better during the winter which meant very dry air. I wondered if I kept the air extra dry, would it help dry out the bacteria-prone discharge in his head? We placed a dehumidifier near his cage which kicked on when it went above a certain percentage. It worked! 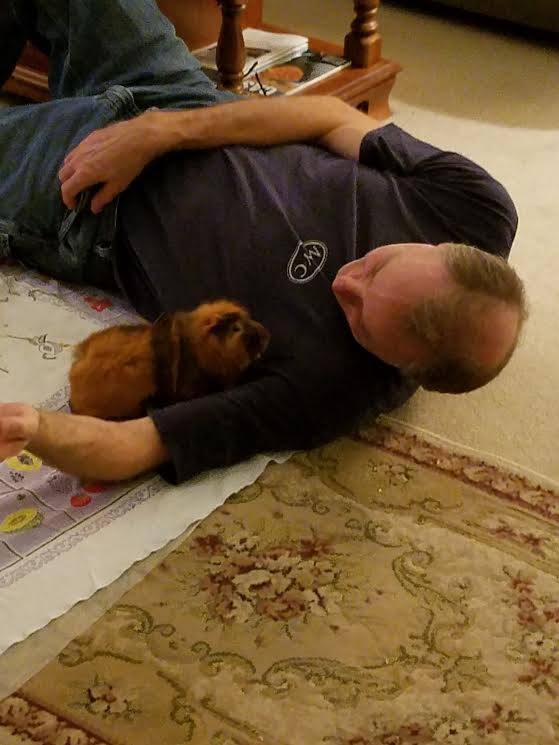 Timmy went on to live another 2 1/2 years after that for a total of three years and four Christmases. Wayne and Timmy bonded nightly on the floor for guy’s TV time (sports, etc.) He went from an abusive “home” to having two dads (my ex visited him weekly) and a mom who spoiled him throughout the day. Because I work from home I was able to spend a lot of time with him. He did more for me than I could ever do for him.

What Timmy taught me:

To be open to love regardless of how others treated you in the past.

Cruel indifference can not be understood and to contemplate it takes away from the loving energy needed to sustain healing from abuse.

Look at life from your “good eye,” in Timmy’s case literally but also metaphorically, your perspective is brighter.

Vision isn’t about the health of your eyes.

Focusing on what’s good and lovely does not equate denial. Timmy lived with the physically damaging effects of his abuse for the rest of his life. The key word is lived. He wasn’t simply surviving.

Animal shelters are lifesaving. It’s imperative that we support them in any way we can.

I hope Timmy’s life and lessons have touched you in some way.

8 thoughts on “The Spiritual Lessons of Abuse and Overcoming”