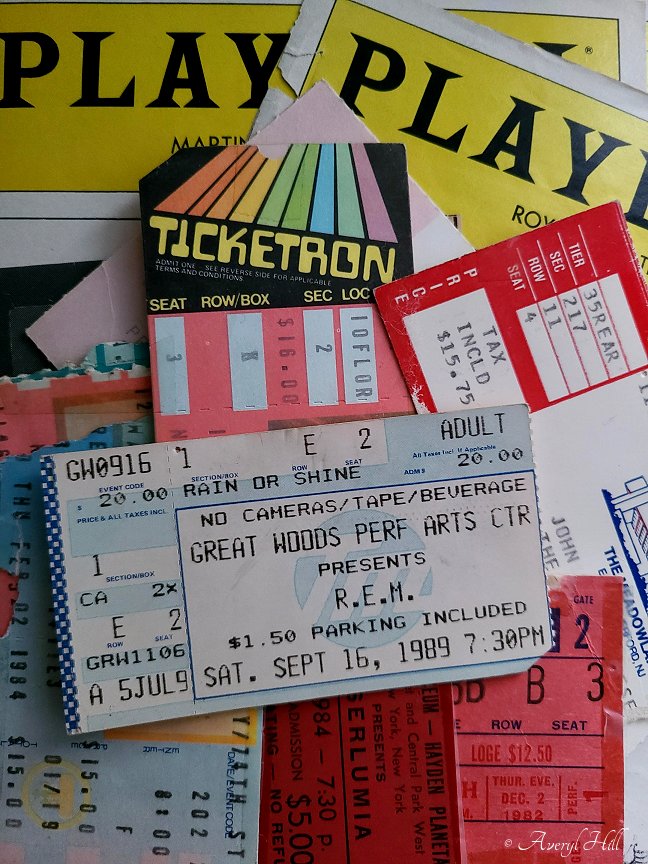 I don’t hold a grudge against Michael Stipe for the hearing loss in my right ear and lifelong tinnitus that is the result of an REM concert in 1989. I was only a few yards away from the speakers on the far right side of the stage. After the concert my ears were roaring for days which gradually lessened but never completely went away. I habituated to it and I only noticed it when it was very quiet, and because it was a low pitch it wasn’t too bothersome. In fact I didn’t know it was called tinnitus until many years later. I thought everyone heard something when it was quiet! Because of that experience I’ve been very protective of my hearing.

There are things we are all exposed to on a regular basis that can damage our ears, but for this post I’m going to focus on the home and a tiny expense that can save your hearing, peace and quiet and possibly thousands of dollars in medical bills. I’m also going to share a very personal cautionary tale about how I recently suffered further hearing damage which has negatively affected my mental health. I’m now ready to write about it and hope it will help someone.

At home I wear earplugs whenever I use my hair dryer, vacuum or make a smoothie with my Ninja. I have a noise meter and my little travel-sized hair dryer (it’s more comfortable for me to hold) exceeds 100 decibels. Hearing loss is possible within 15 minutes of exposure to sounds of 100 db! That’s straight from the CDC. I also wear ear plugs to concerts now, naturally!

Each pair of ear plugs I use is about thirty cents and because they’re made from silicone they can be washed. I still will use a fresh pair every couple of weeks, so that’s about $7 annually to preserve my hearing and guard from aggravating my tinnitus. Hearing aid are very expensive and usually aren’t covered by insurance.

However, my ear plugs couldn’t protect me from what happened this past fall.

One of my pet degus, Stella, had a seizure. When we adopted her, she was already four years old and had never been socialized or handled according to the adoption papers. She was extremely shy and hid for weeks. While she eventually trusted me enough to eat from my hand she ran away if I tried to pet her. So when I went to pick her up and she didn’t run away I knew something was very wrong. She became very still. While holding her against my chest with one hand I reached for a carrying case to put her in so I could take her to the vet. It was then that she suddenly came to and pushed herself away from me and made a break!

Stella was disoriented and began running into the walls in my kitchen. I was terrified that she was going to injure herself. I panicked and chased after her. I almost caught her but she squirmed out of my hands. Again we ran in circles until I grabbed onto her hard so she couldn’t wiggle away and lifted her up as I carried her back to her cage. It was then that she bit me in multiple places as she tried to free herself from my grip. She was just scared and I don’t blame her for biting. She had never tried to bite me before then. I wouldn’t let go because it would have meant dropping her to the ground so I held on until she was back in her cage. She was OK and hasn’t had another seizure since then. (I figured out a new brand of food that I bought was the culprit!)

Wayne was at work while all this was happening.

I looked at my hands and because of the adrenaline I couldn’t yet feel anything but I noticed little bites and a deep puncture wound. I called my doctor’s office and they had me come in right away. I was given a tetanus booster and put on a five day course of an antibiotic called Augmentin to prevent a possible infection. Two days after I had finished my course my health rapidly deteriorated and I ended up in the ER with something I had never heard of before: C Diff. The Augmentin killed off the good bacteria in my gut (and I was even taking probiotics while on it) so that the bad bacteria was able to take over, even after I was off of it. A C Diff infection can rapidly progress and kill you. I was shocked at how it quickly took me down to the point I was in the ER with pain so bad I nearly passed out in the waiting room.

Ironically the only treatment for C Diff is another antibiotic! I was prescribed a 10 day course of Vancomycin which is an ototoxic drug meaning it’s toxic to your ears. I’m so grateful that it saved my life but five days in my low pitched tinnitus became very high pitched and I still have it today although the pitch and intensity has lessened somewhat for which I’m also very grateful. I was anxious and depressed for a couple of months because I was unable to tune it out or mask it with music or white noise. It was awful. Restarting my blog has helped me take my mind off of it.

I have been to two ENTs and that is when I learned that I have asymmetrical hearing loss in my right ear (the one facing the speaker at REM). Because I never had a hearing test prior to then it’s unknown if my hearing loss actually occurred in 1989 or afterward, but it’s a fact that my previously low-pitched tinnitus started after that concert and tinnitus is almost always caused by hearing loss. I was told by both ENTs that there’s a 1% chance that I have a brain tumor (!) called an acoustic neuroma since asymmetrical hearing loss is one of the signs, but the timing of the new tinnitus coinciding with my course of Vacomycin has me convinced a brain tumor is unlikely. I experienced some vestibular issues while on the Vanco which resolved when I went off of it which one of the ENTs said means it’s more likely I suffered ototoxicty. I’m being monitored, though, which includes future hearing tests and watching for red flag symptoms. If that occurs I will have a brain MRI.

Something very sweet: Shortly before the degu’s two year anniversary on Groundhog Day Stella decided that it’s not just OK if I pet her but she loves it! Click here for a little video.

Save your hearing and wallet–protect your ears! And if you have to take an antibiotic be aware that there are some which are likely to cause C Diff and Augmentin is one of them (again I had NO idea!). The cure can save your life but possibly harm your ears. Oh, and don’t pick up a degu having a seizure!