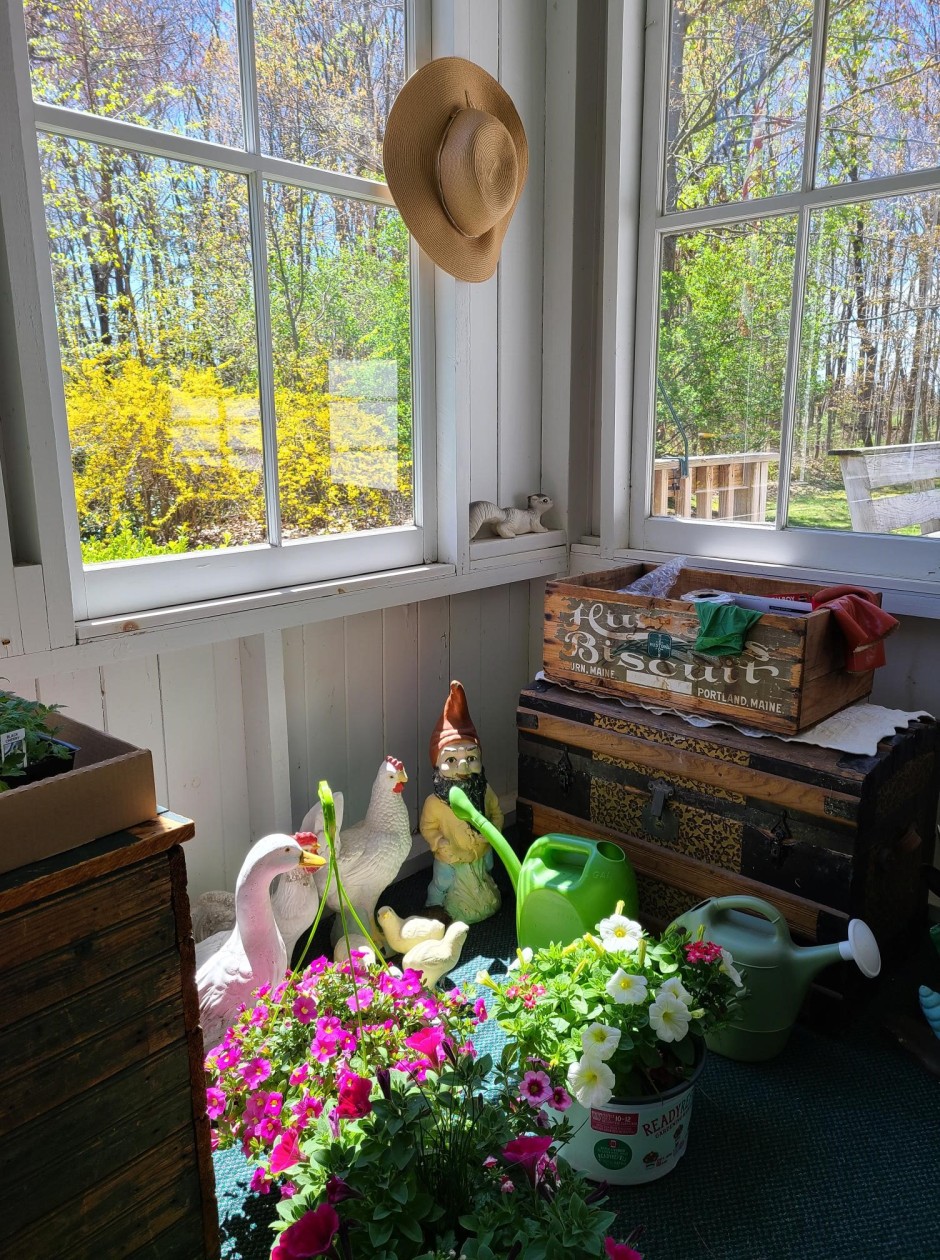 My adventures in securing potted annual flowers and tomato plants, with Lemon Boys being the most desired began early this morning. It’s strange seeing how much has changed since I was out and about a year ago. For example, a century old church was razed and there is a new apartment building being constructed. Marijuana dispensaries with names like House of Hash (Maine legalized marijuana) have popped up near the mall/big box store area where I was headed. The super friendly and helpful older lady who has worked the cash register at the Big Box plant nursery for over twenty years is no longer working there, and the two younger replacements weren’t helpful. No one knew where the tomato plants were but I finally found three sad ones on mostly empty shelves. I knew I was done with that place. The nice lady was the only reason why I still went in the past. Since the pandemic I’m less tolerant of things that wear and tear on my psyche. Bye bye Big Box store! I did notice some pretty, low priced hanging flowering plants on my way out, though. Not for me, I’m done, so over that chain of questionable repute. Onward!

But I knew what that meant. I’d have to go to the very nice locally owned nursery with the horrifying chaotic overcrowded narrow parking lot situation where I once almost got run over by an elderly lady on a moped.

Even at first thing in the morning on a weekday the lot was almost packed, and when I went into the vegetable greenhouse an employee said to a customer, “I’ll have to see if we have more Lemon Boys somewhere else.” Yes, there was a little crowd of people looking for them and after some back-and-forth on his walkie talkie the news hit hard: they were already sold out! I bought a few other favorite varieties and some new to us, then looked at their very expensive hanging plants and knew that my $5 off coupon still had them at more than I wanted to pay. It’s not that we couldn’t afford it but this thrifty Yankee isn’t going to pay $45 or more for an outdoor hanging plant that will only last a few months when there are many lower-cost equally lovely options.

Next I went to Lowes, another big box store but I generally like them. Their shelves were full of tomatoes but no Lemon Boys and I didn’t like any of the hanging plants. I did buy two potted annuals, one to place in the barrel in our front yard and one to place on the deck. I’ve gotten them from here every year and they always thrive and the price is right! But it looked like there would be no Lemon Boys this year and I still needed a hanging plant for the deck.

Again, I knew what that might mean. I’d have to be naughty and break my boycott! Such a scandal. Hey, this is how I keep myself entertained!

Back at the Big Box store before I paid for the hanging flowers I checked once more for tomatoes in their nursery just in case. Well! Since an hour earlier THE SHELVES HAD BEEN STOCKED WITH TOMATOES and there was a WHOLE FLAT of ten Lemon Boy plants! Even better I was able to use my coupon from Bonnie that they sent me last year when the “beefsteak” type tomatoes I bought turned out to be small mystery tomatoes they don’t even sell! (This was around the same time the media was reporting people were receiving mysterious seeds from China in the mail.)

I’m so happy with what I scored this morning! For now they will stay in the sunroom in the day and come into the kitchen at night until Memorial Day weekend. Presently the sunroom smells like flowers and fresh greenery and I’m hoping Wayne will be thrilled when he sees it all later when he gets home!

11 thoughts on “When Life Hands You Lemon Boys”